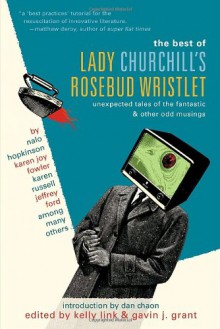 So good there had to be a book. Or something. The Best of Lady Churchill’s Rosebud Wristlet is now available from the fine folks at Del Rey. It’s a collection of fiction and sometimes fancy (but usually plain) knitting patterns (a lie), recipes (ok, there are a few drink recipes), poetry (some great poetry), and an apology or two.

It is the most surprising anthology of the year (in many ways: scary stories, poetry, a book from a zine, a flying iron, so many ways).

We hope you will enjoy it and we hope to do another of these. There was so much we wanted to put in and couldn’t.

What did Jim Munroe say? “Like the whisky sours they so admire, the Rosebud Wristlet gang have brought whimsey and fantastical twists to a malt steeped in literary tradition: stories as potent as they are tasty.”

This is what the publisher said:

Unexpected tales of the fantastic, and other odd musings by Nalo Hopkinson Karen Joy Fowler Karen Russell Jeffrey Ford among many others.

Contains STORIES by the AMAZING Jeffrey Ford, the FABULOUS Karen Joy Fowler, the UNLIKELY Kelly Link, the THRILLING Nalo Hopkinson, the SHOCKINGLY GOOD Karen Russell, the UNNERVING James Sallis, and dozens of UNCANNY others, as well as USEFUL lists of many kinds and STRAIGHT-SHOOTING advice from Aunt Gwenda.

Pictures of the book.
Wikipedia!

“Because of its quirks, rather than in spite of them, the collection is an immersion into a fantastic world.”
— Adrienne Martini, Baltimore City Paper

“Genre-blurring stories, poems and articles by a few major authors—including Theodora Goss, Sarah Monette and Karen Joy Fowler—and a host of relative unknowns appear in The Best of Lady Churchill’s Rosebud Wristlet, edited by Kelly Link and Gavin J. Grant. With a major SF imprint publishing this hefty anthology, LCRW’s times as a low-profile fringe zine may be at an end, though it remains to be seen whether mainstream readers will share Link and Grant’s fondness for the oddball and peculiar.”
—Publishers Weekly

“Showcasing a selection of the top new and exciting writers working today, The Best ofLady Churchill’s Rosebud Wristlet presents a wondrous playground for lovers of experimental and avant-garde literature. If this is the 21st century zine, the form can be taken off the endangered list.”
—Rick Klaw (Austin Chronicle)

“LCRW is one of my favorite literary magazines, featuring authors like Jeffrey Ford and Nalo Hopkinson and strange and lovely stories you won’t see being published in the Paris Review or VQR. (And why not, I might ask you.) The fact that one of the editors is one of the best living short story writers doesn’t hurt.”
—Jessa Crispin

“Idiosyncratic to the extreme, this collection of the best of the zine Lady Churchill’s Rosebud Wristlethighlights some of the weirdest and most interesting writing in speculative fiction. Short stories, poetry, essays and assorted nonfiction make this a must for fans of bleeding-edge speculative fiction with a distinct literary — and bizarre — bent.”
—Romantic Times (4.5 stars)

“A treasure trove. . . . a quirky mix that has become the hallmark of LCRW. Eclectic, heart-warming, cautionary, funny, informative, and most of all enthralling best describe this book. You will find no better place to explore this outstanding and unique publication: I highly recommend you pick up a copy today.”
—Sf Revu

“Dan Chaon provides an introduction, but really, no introduction can quite prepare you for the celebrated mix of insane ideas that await in the pages, ready to pounce. Link herself delivers the first, a modern-day revisionist fairy tale titled “Travels with the Snow Queen.” Karen Joy Fowler’s “Heartland,” about doomed young love amongst fast-food employees, is a heartbreaker, and among the book’s early highlights.”
–Rod Lott (Bookgasm)