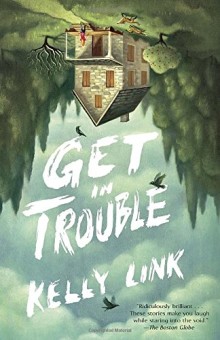 Paperback edition: February 9, 2016 Pulitzer Prize Finalist in Fiction “A collection of short stories in which a writer with a fertile and often fabulist imagination explores inner lies and odd corners of reality.”

“In stories as haunting as anything the Grimm brothers could have come up with, Link (Magic for Beginners, 2005, etc.) gooses the mundane with meaning and enchantment borrowed from myth, urban legend and genre fiction. Here are superheroes who, like minor characters from reality shows, attend conferences at the same hotels as dentists and hold auditions for sidekicks. Here, a Ouija board can tell you as much about your future as your guidance counselor. In “Two Houses,” six astronauts wake from suspended animation to while away the time telling ghost stories, although they may be ghosts themselves. In “I Can See Right Through You,” an actor past his prime, famous for his role as a vampire, yearns for the leading lady who has replaced him with a parade of eternally younger versions of what he once was—but who is the real demon lover? In “The New Boyfriend,” a teenager discontent with her living boyfriend toys with stealing her best friend’s birthday present, a limited edition Ghost Boyfriend, capable of Spectral Mode. In “Light,” Lindsey has two shadows, one of which long ago grew to become her almost-real twin brother. She contemplates a vacation on a “pocket universe,” a place “where the food and the air and the landscape seemed like something out of a book you’d read as a child; a brochure; a dream.”  Lindsey could be describing Link’s own stories, creepy little wonders that open out into worlds far vaster than their shells. In a Link story, someone is always trying to escape and someone is always vanishing without a trace. Lovers are forever being stolen away like changelings, and when someone tells you he’ll never leave you, you should be very afraid. Exquisite, cruelly wise and the opposite of reassuring, these stories linger like dreams and will leave readers looking over their shoulders for their own ghosts.” — Kirkus Reviews (starred review)

“These nine stories may begin in familiar territory a birthday party, a theme park, a bar, a spaceship but they quickly draw readers into an imaginative, disturbingly ominous world of realistic fantasy and unreal reality. Like Kafka hosting Saturday Night Live, Link mixes humor with existential dread. The first story, entitled “The Summer People,” in homage to Shirley Jackson, follows an Appalachian schoolgirl, abandoned by her moonshiner father, as she looks after a summer house occupied by mysterious beings. “I Can See Right Through You” features friends who, in their youth, were movie stars; now in middle age, she is the hostess and he is the guest star of a television show about hunting ghosts at a Florida nudist colony. “Origin Story” takes place in a deserted Land of Oz theme park; “Secret Identity” is set at a hotel where dentists and superheroes attend simultaneous conferences. Only in a Link story would you encounter Mann Man, a superhero with the powers of Thomas Mann, or visit a world with pools overrun by Disney mermaids. Details a bruise-green sky, a Beretta dotted with Hello Kitty stickers bring the unimaginable to unnerving life. Each carefully crafted tale forms its own pocket universe, at once ordinary (a teenage girl adores and resents her BFF) and bizarre (…therefore she tries to steal the BFF’s robot vampire boyfriend doll). Link’s characters, driven by yearning and obsession, not only get in trouble but seek trouble out to spectacular effect.” — Publishers Weekly (starred review)

“Link’s haunting collection of short stories trades in both the familiar and the macabre, creating worlds in which ghosts are accepted, space travel is a given, and superheroes are all too real. There isn’t a bad performance by any of the nine actors here, though three stand out more than others. Kirby Heyborne’s rendition of the melancholy tale “I Can See Right Through You,” in which he portrays an aging movie star who pines for his glory days, is poignant. Heyborne brings some needed humanity to “the demon lover,” another character in the same story, who is more complex and perhaps sinister than is immediately apparent. Another top-notch performance is by Susan Duerden in “Two Houses,” a futuristic story about a space crew awakened from cryogenic sleep for a celebration that takes a dark turn. As the story progresses, it becomes clear that the breathy nature of Duerden’s performance, which sometimes descends to a mere whisper, is no accident but a spot-on character decision. Finally, the childlike voice of Ish Klein shines perfectly in “The New Boyfriend,” in which one teen girl is jealous of her friend’s newest robot boyfriend.” — Publishers Weekly

Advance praise for Get in Trouble

“Kelly Link is the author whose books I would take to the proverbial desert island. Link’s work is always darkly funny, sexy, frightening, and truly weird—she can dismantle and remake the world in a paragraph. Get in Trouble offers further proof that she belongs on every reader’s bookshelf.”—Karen Russell

“Get in Trouble contains some of Link’s best writing yet. These are not so much small fictions as windows onto entire worlds. This is a brilliant, giddying read.”—Sarah Waters

“Kelly Link is one of my all-time favorite writers. You know who else would love her? Kafka and Lewis Carroll. Like them, she knows the things the rest of us don’t. But she also knows how to make well-known heartbreaks glow with strange new lights.”—Arthur Phillips

“Kelly Link’s prose is conveyed in details so startling and fine that you work up a sweat just waiting for the next sentence to land. This is why we read, crave, need, can’t live without short stories.”—Téa Obreht

“Kelly Link is inimitable. Her stories are like nothing else, dark yet sparkling with her unique brand of fairy dust. This is the most marvelous kind of trouble to get in.”—Erin Morgenstern

“Every one of the stories in this collection is like a one-of-a-kind jack-in-the-box. How does Kelly Link understand our pains and longings and memories and even our futures so well?”—Yiyun Li

“Close your mouth and get out of the way, because here comes Kelly Link, than whom no one is better.”—Peter Straub

“The stories in Get In Trouble confirm once again that Kelly Link is a modern virtuoso of the form—playful and subversive required reading for anyone who loves short fiction.”—Jeff VanderMeer