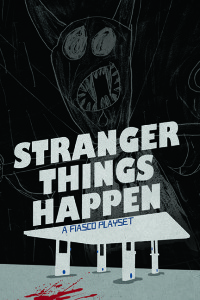 A couple of years ago Benjamin Rosenbaum proposed a Fiasco playset based on Kelly’s first collection of stories Stranger Things Happen. Fiasco is a storytelling game where players make up and tell each other stories with different playsets that allow them to bring in different elements, tropes, and tones to the stories. Ben wrote the playset and Steve Segedy of Bully Pulpit Games put the bundle together and it has just been released.

The bundle is exclusively available on Weightless Books and on the DriveThruRPG site, and comprises full sets of digital files (epubs, mobis, pdfs) of:

“Fiasco is one of the greatest storytelling RPGs I’ve ever played. I highly recommend it.”
— Wil Wheaton

“Pity the poor librarians who have to slap a sticker on Kelly Link’s genre-bending, mind-blowing masterpiece of the imagination, Stranger Things Happen.”—Karen Russell, author of Swamplandia, for NPR’s You Must Read This

About The Ant King and Other Stories

* “Give him some prizes, like, perhaps, “best first collection” for this book.”
—Booklist (Starred review)

“A terrific range of tales, showcasing an active, playful mind and a gleeful genre-blender.”
—Aimee Bender

“Ben Rosenbaum is one of the freshest and finest voices to appear in science fiction in many years. The stories collected in The Ant King demonstrate his astonishing versatility, his marvelous imagination, and his ready wit.”
—Jack Womack

No scheduled appearances at this time.